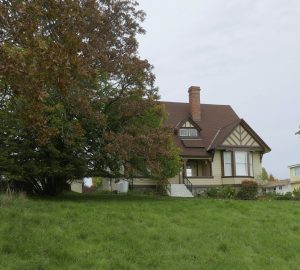 Millennia prior to 1800
The land around Victoria was Straits Salish traditional territory. Interior forested areas, creeks and wetlands, such as the area now know as Cedar Hill Park, were an important source of food and resources.

1886
George and Elizabeth McRae purchased 150 acres from the Hudson Bay Company including the land that became Cedar Hill Park.

1906
The Municipality of Saanich was incorporated.

1930-36
A city map dated 1936 showed roadways planned for construction across the park.

1956
Saanich Reeve, Arthur Ash, recognized the value of the land now known as Cedar Hill Park as a future municipal park and recommended that the area be purchased. Funding was not forthcoming. (Saanich Archives McRae Estate Correspondence)

1965
Residents discovered that the parkland was being staked by surveyors for a subdivision. They objected to Saanich and Council began negotiations to purchase and preserve the area as a park.

1967
Saanich Council under Mayor Hugh Curtis and the McRae family estate approved a court-arbitrated agreement that Saanich acquire the parkland for $1.2 million. Cedar Hill Park, as we know it today, was created.

1971
The first golf clubhouse was built; Saanich took over management of the golf course in 1972.

1973
The Cedar Hill Recreation Centre was constructed on the site of the McRae cattle barn.

1985
The George McRae farmhouse at 1445 Ocean View Road was recognized as a Heritage Building. This house is one of the oldest surviving farmhouses in Saanich.

1986
A Municipal proposal to develop a residential subdivision on the east side of the park along Diana Road was defeated after neighbours strongly objected to the loss of parkland.

1993
The McRae residence houses the offices of the Saanich Volunteer Services Society that provides services to seniors who live at home.

1994
A proposal for a lawn bowling facility behind the Cedar Hill Recreation Centre for the Commonwealth Games was rejected. The neighbourhood preferred to retain the green space.

1996
After the golf clubhouse burned down, the current clubhouse was built as a replacement with a budget of $2 million.

2006
Saanich Parks, after extensive community consultation, completed the installation of a golf course irrigation system that is dependent upon the aquifer below the park.

2006
Neighbours formed the Friends of Cedar Hill Park to work in the park to remove invasive plant species and to restore native species.

2011
A proposal to develop garden allotments in the southeast corner of the Park below the McRae house was discussed at Council. Due to opposition from residents, this proposal was not pursued.

2012-2014
A proposal from the Cedar Hill Clay Court Tennis Society for construction of eight clay tennis courts and a tennis pavilion on a large area between Bowker Creek and the Recreation Centre was defeated unanimously at a public meeting of Saanich Council. Friends of Cedar Hill Park and neighbours attended in large numbers to show their strong opposition to losing parklands.

2013
The Municipalities of Saanich, Oak Bay and Victoria approved the Bowker Creek 100 Year Blueprint as the basis to restore the watercourse including the tributary that flows through Cedar Hill Park.

2013 – 2020
A subdivision to construct 5 homes on Ascot Drive that included a sensitive wetland was proposed.  Neighbours and Friends of Cedar Hill Park opposed the subdivision because of its impact on the wetland. Saanich Council agreed to buy the wetland area for $700K in 2014. In the following years additional wetland and adjacent areas were added through purchase and donation to enlarge the area known as “Jenkins Pond”.

2014
Neighbours of the Park formed The Friends of Cedar Hill Park Society to expand the original group of Friends and to advocate, engage and collaborate with the community, the District of Saanich and other interested parties to the future preservation of the Park.

2018 – 2020
Representatives of local community associations and FCHPS joined Saanich staff to prepare a Cedar Hill Park Management plan that covers all areas with the exception of the golf course. The plan was approved by Saanich Council in 2020.

2019
The District of Saanich engaged consultant Kerr, Wood and Leidal to prepare a Design Alternatives Review of Bowker Creek Reach 17 within Cedar Hill Park to research the alternatives for restoring and daylighting sections of this reach.

2021
Neighbours of the Park advocated to the District of Saanich to reject the subdivision of a one acre area of privately-held property between Tracksell Avenue and Tattersall. This development would have jeopardized a significant area of Garry Oak ecosystem and severely impacted a large rocky outcrop on Tattersall. Saanich negotiated to acquire the area as part of Cedar Hill Park.

The mission of The Friends of Cedar Hill Park is to advocate and collaborate with our community and other stakeholders to preserve the biodiversity, natural areas, wetlands and creeks for future generations.